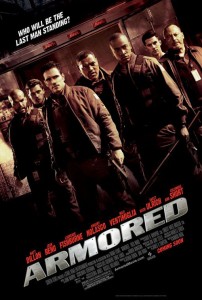 I watched the star packed movie Armored earlier tonight. I must say, I was quite disappointed in this movie. I think I would of been more upset to have spent $20+ at the movie theaters as it would of been myself and my girlfriend Jordan at least there. I recommend only renting this one.

Basically what you see, is what you get. If you have seen the trailer, you know what the movie is about so do not expect more than that. There was no crazy twist or turn here in this movie which possibly may of made it even better. I will also point out it was a very short movie, only an 1 hour and 22 minutes long.

I think I would of enjoyed a different plot then what was shown in the movie. You could maybe split up the actors all working at the Armored Truck Service and have one half trying (bad) trying to steal the truck. Then the other half trying prevent the armored truck(s) from being stolen without any outside assistance and then go from there.

Anyways, that is not how the movie was or ever will be. It seemed as if some of the actors, especially Laurence Fishburne, Jean Reno ad Skeet Ulrich really enjoyed bitching a lot in this movie and acting very pussy like. Even if they are just armored guards, I expected more out of such great actors. Unless they were playing these characters like such because they figured they finally realized they signed onto a terrible project and wanted to get it over with.

Waiting till the last minute…

Stream Media From Your Mac to Xbox 360